The Guyana Sugar Corporation, best known by its acronym GuySuCo, is a Guyanese sugar company owned by the government. It is the country’s largest cultivator and producer of sugar, a commodity which is responsible for approximately 20% of Guyana’s annual revenue and 40% of all agricultural production. They are also notable for selling Demerara Sugar, and also honey and sweeteners.

The company as GuySuCo was formed in 1976 when the government of Guyana nationalized and merged the sugar estates operated by Booker Sugar Estates Limited, Tate and Lyle and Jessels Holdings to form the Guyana Sugar Corporation. One of its noted products is brown sugar produced in the Demerara River basin which is exported internationally to the European Union, the United States of America, and the Caribbean Community (Caricom) countries. 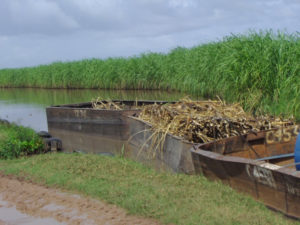