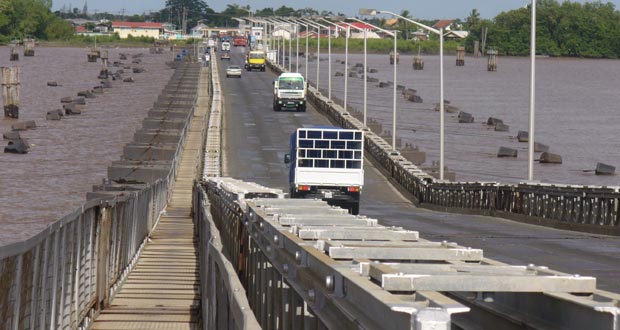 The Demerara Harbour Bridge is a 6,074-foot (1,851 m) long floating toll bridge. It was commissioned on 2 July 1978. The bridge crosses the Demerara River 4 miles (6.4 km) south of the Guyanese capital Georgetown, from Peter’s Hall, East Bank Demerara to Schoon Ord, West Bank Demerara, connecting Demerara-Mahaica (Region 4) with Essequibo Islands-West Demerara (Region 3) on the west bank. There is a pedestrian footwalk. A raised section lets small vessels pass under. A retractor span lets large vessels pass. Construction of the Demerara Harbour Bridge began on 29 May 1976. Construction assistance was provided by the British Government, but the basic design was by a Guyanese, Capt. John Patrick Coghlan. The bridge was only designed to last 10 years, yet it is still going strong. Tolls are collected only in one direction of travel even though the bridge handles one lane of traffic in each direction. Traffic going west to east pays no toll. 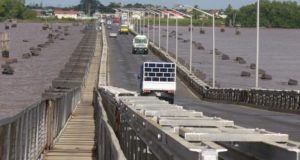