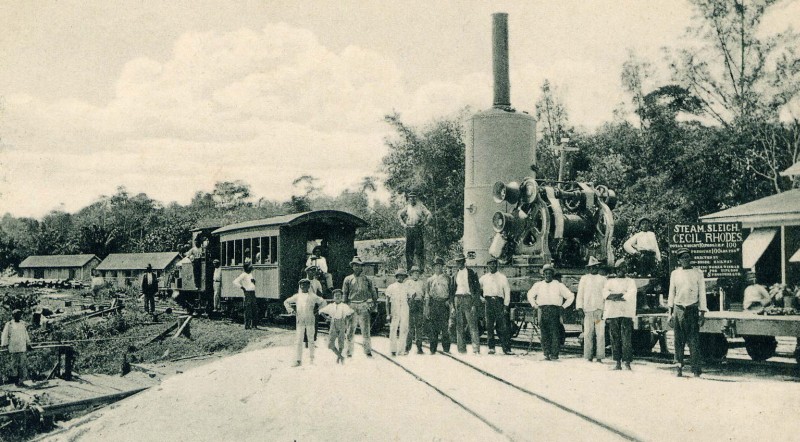 The Demerara-Berbice Railway, built-in then British Guiana (now Guyana), was the first railway system on the South American continent. It was first operated by the Demerara Railway Company, a private concern, but sold to the Colonial Transport Department of the Government, which assumed control from 1 January 1922.

The railway ran for 97.4 kilometers (60.5 mi) along the coast from the capital and main port Georgetown in Demerara to Rosignol in West Berbice, whence it was connected by ferry steamer across the Berbice River to New Amsterdam.

The bill proposing the construction of the railway was passed in July 1846.  The railway was designed, surveyed, and built by the British-American architect and artist Fredrick Catherwood All the railway stations, bridges, stores, and other facilities were constructed by John Sharpes. Financing was provided by the Demerera Sugar Company who wished to transport their product to the dock of Georgetown. Construction was in sections with the first, from Georgetown to Plaisance, opening on 3 November 1848. The opening day’s festivities featured the death of one of the railway’s directors by being run over by the locomotive.

In 1948 the railway system in Bermuda was dismantled and sold ‘lock, stock & barrel’ to the government of British Guyana (as the country then was) to rejuvenate the former system. The locomotives (petrol or diesel [just 2]) and coaches were fully restored, the latter being painted dark green. In 1953 the public lines in the colony carried 1,772,954 passengers and 92,769 tonnes of freight. A bold plan to extend the railway south to Brazil was never proceeded with.

The public railway system was dismantled in stages in the early 1970s by then President Forbes Burnham.

The Lamaha Street terminus of the Demerara-Berbice Railway was converted into a bus terminal subsequent to the closing of the railway.

Steam engine hauling a steam winch with the vertical boiler.